Skip to content
Prev
Next
After Cultivating With the Enemy

Chapter 11.1 – This was obviously a place for a tryst!

After Cultivating With the Enemy

Jan 2022: If you have found this translation anywhere except on Dummynovels (https://dummynovels.com/novel/after-cultivating-with-the-enemy/), it has been stolen. There has been no authorisation to be posted anywhere else, especially on those sites that charges money for access to translations. The only translator is myself. Discord Amber.es#5546

Not locking access to allow readers to still enjoy so please don’t abuse this sharing. As always, to support the author, click here (http://www.jjwxc.net/onebook.php?novelid=4317191)

Ji Chaoyun was startled, and then quickly turned his head away. “Never!”

Seeing him with this appearance, Feng Qi’s hands became even more itchy. He endured and pretended that nothing was wrong. “If it’s a no, then it’s a no. Why are you blushing?”

“Am not.” Ji Chaoyun moved to the other side of the rock and awkwardly declared, “Anyway… it just can’t be that. Change to something else.”

Feng Qi retracted his gaze. His words were accompanied with a sense of loss that even he didn’t notice. “Joking with you. I didn’t really want to touch you, I’m not a pervert.”

Ji Chaoyun didn’t talk any more. Feng Qi glanced at him and couldn’t help saying, “I wanted to ask before. Why did you…”

“Why do I look like this?” Ji Chaoyun didn’t intend to conceal it. He bent down, resting his chin on his knees, and curled himself up. “You can’t guess? My cultivation is not proper; the demonic body still remains. A half-demon, half-immortal body.”

“So on normal days your cultivation is limited because you want to hide your demonic spirit?”

“En.” Ji Chaoyun hesitated. He pursed his lips, then slowly continued, “After I turn back into this demonic form, my temperament… will be a little different. In the past, I would use half of my cultivation base to calm my demonic spirit, but once my emotions are agitated or affected, it becomes easier for it to leak out and show its original form.”

Feng Qi: “But you have clearly risen to an immortal level. Why are you still doing this?”

“Perhaps this is the price.” His gaze fell to the dark pool water in the distance, his eyes seeming sad and sentimental. “If you want to get something, you have to exchange it for something else. Heaven’s way is always fair.”

For a while, he rubbed Ji Chaoyun’s hair and said, “Qi Xuan won’t disclose what happened today, but you should be careful in the future. I can’t come to help you out like this every time.”

Feng Qi smiled. “Other than saying thank you, can you say anything else?”

It was cold and humid in Jingxin Cave. Ji Chaoyun had been in the snow for a long time today. After the snow had melted and soaked his clothes, he was blown by the cold wind in the cave, turning his lips pale.

Feng Qi quickly realised that something was wrong. “Cold?”

Feng Qi exclaimed, “You, a dragon, are afraid of the cold? What do you do when you go back to the sea?”

Feng Qi had a sudden realisation. So Ji Chaoyun was still a freshwater dragon.

He had no experience with dragons in the past. He continued to probe, “It’s all the same. When you enter the waters, won’t you feel the cold?”

“A dragon body has scales to protect it. It will adjust.” Ji Chaoyun heard Feng Qi’s tone, as if he was a rarity, and glanced back unhappily. “I also want to know, as a fire phoenix, how can you not be chilled at all?”

Feng Qi grinned. His tone was quite triumphant. “I’m born to be like this, unafraid of neither heat nor cold. Among the Feng clan, only I have this physique. I thought it was strange at first, but when I thought about it later, maybe this is because of my natural talent.”

Ji Chaoyun could not rebut him. In his heart, he recalled the rumor in the academy saying that this person was a peacock. It was true; him casually saying this as he spread out his train of feathers.

Ji Chaoyun resisted the urge to roll his eyes, straightforwardly saying, “Then you are really amazing.”

Feng Qi seemed to be particularly used to this flattery. Towards Ji Chaoyun, he stretched out his hand. “Come here.”

Ji Chaoyun vigilantly questioned, “What are you doing?”

Feng Qi: “My body is warm. It won’t be cold if you come closer to me.”

“Why, still shy?” Feng Qi smiled and said, “Didn’t know who it was just now, when still dazed, kept sticking into my arms. Now you know how to be shy?”

Ji Chaoyun was stunned. The earlobes hidden beneath the silvery hair flushed red.

“Don’t talk nonsense, how could I—”

“I’m not talking nonsense.” Feng Qi raised his eyebrows. “When old man Tianshu led some people over, you were pressed into my arms, acting so coquettish; I couldn’t even pull you away. Tianshu was so scared that he thought I was taking advantage of you. Alright, come here quickly, or I’ll catch you.”

“…” Ji Chaoyun clung to his clothes’ lapel, cuttingly saying, “If you dare to touch me…”

Feng Qi smiled. “Why, calling for someone again?”

He leaned forward in a deliberate manner and whispered maliciously, “You can shout. There is a sound blockage technique placed inside this meditation cave. Even if I really do something to you here, you can’t do anything else.”

Ji Chaoyun silently moved to the side. Then he shifted again, as if to draw a clear line from Feng Qi. Fortunately, Feng Qi didn’t continue to say anything. After a while, Ji Chaoyun suddenly felt a warm light behind him.

He looked back. Feng Qi had ignited a small cluster of warm golden flames from his palm.

Feng Qi tilted his head towards Ji Chaoyun from across the flames and smiled. “This should be fine, right? Come closer. Such a big man being so sensitive, not allowed to hold nor touch. Is it possible that you are a woman?”

Feng Qi beamed and ordered, “Come here. If you get sick, how can you go to the Nameless Sea tomorrow?”

These words hit right to the bottom of Ji Chaoyun’s heart. Thinking of tomorrow’s affairs, he swallowed his anger and slowly moved back to Feng Qi’s side.

The two quietly sat side by side by the pond, golden flames flickering in front of them. His body, originally frozen and numb, finally warmed up a little bit. Ji Chaoyun turned his head to look at the flames, and awkwardly raised his head.

Feng Qi’s eyes reflected the flickering of the warm glow. That face of his became even more handsome and outstanding, a soft smile at the corner of his lips, adding a sense of gentleness.

This appearance became very similar to the person in his memory.

Too ridiculous, Ji Chaoyun closed his eyes and softly stated in his heart, impossible.

The Nameless Sea was located in the gap between the immortal and mortal realms. This place used to be a barren area. Three hundred years ago, the war between gods and demons spread to this place, and a gap was torn, gradually forming this boundless sea.

Hundreds of years passed, and this place became an unobstructed place for the unhindered circulation of immortals, demons and gods.

Feng Qi took Ji Chaoyun on an immortal carriage, travelling across the waters. Very quickly, they saw the towering city standing under the sea from a distance.

Ji Chaoyun lowered the carriage’s curtain, turned around and asked Feng Qi, “What are you doing?”

“Don’t be noisy. It’s almost done.” Feng Qi got in the carriage, with a half-silver mask in his left hand and a pen in his right one, drawing a few smooth and curved lines along the outline of the mask’s eyes.

Ji Chaoyun patiently sat down beside him, and saw a vivid silver dragon gradually forming on the mask under a few strokes of Feng Qi’s flowing brush.

“How is it?” Feng Qi raised the mask in front of Ji Chaoyun and asked with a smile, “Does it look like you?”

“…” Ji Chaoyun was silent for a moment, then turned his head. “…Ridiculous.”

Feng Qi looked very satisfied. He placed the half-mask with the little silver dragon onto Ji Chaoyun’s face and said, “Don’t show your true face at the sea marketplace. I’ll give you this mask with a mark for easy identification.”

In his heart, Ji Chaoyun thought, just by using one’s attire and the other half of the face to judge, how could one not recognise? This was obviously just a bad hobby.

But even if he resisted, there was no changing the matter. He could only let Feng Qi fiddle, and muttered, “…I see.”

The immortal carriage quickly passed through the barrier into the Nameless Sea, stopping outside the city gate.

Most of the sea water there was blocked by the barrier. It looked no different from the mortal land. People come and go in front of the city gate, all wearing special masks on their faces. One could not infer their identity.

“Let’s go.” Feng Qi patted Ji Chaoyun on the shoulder and jumped out of the carriage first.

He wore a golden mask on his face. The texture and shape was the same as those on Ji Chaoyun’s, except that the phoenix tail pattern was carved at the corner of his eye. Ji Chaoyun subconsciously touched the silver dragon painted by Feng Qi. A very strange feeling appeared in his heart.

It was as if… their masks were a pair.

He shook his head, driving out some strange emotion, and followed Feng Qi into the city. 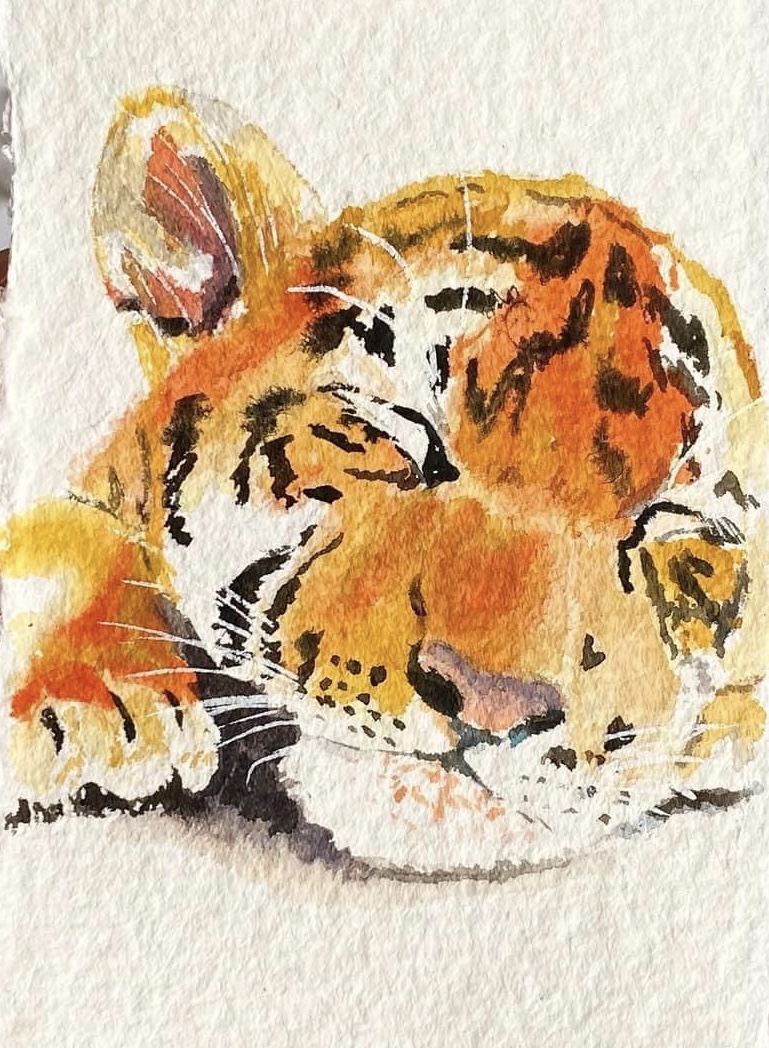 Translating novels from Chinese > English and Japanese > English. Sharing the love of reading to everyone! ★ \(0w0). If you drop me a ko-fi or sign up for my tiers, you can have access to early chapters~