The sound of rainfall meshed indistinctly with the waves in the distance.

When Xia Yi dazedly woke up, the sky was still dark outside and his neck was stiff due to his poor sleeping posture. As he awkwardly stood up, he abruptly froze.

The sound of rain!

What he was hearing were the quiet pitter-patters of raindrops as they landed on the shoals! Xia Yi practically crawled out of the cave on all fours and allowed the cold drizzle to fall upon his face.

There had never been a rainfall that brought him as much bliss as this one.

Since it was raining… did this mean that the atmosphere was gradually repairing itself?

The heat during the day had caused large quantities of seawater to evaporate, so at nightfall, rain clouds gathered over the ocean. However, this rain was abnormally light and intermittent, with only a few drops landing on Xia Yi’s face every now and then— there was also the fact that the land had yet to receive this treatment.

But it was still raining, which was better than no rain at all. This wasn’t the end of the world as there was still hope for survival; what more could they ask for?

He was once ready to die out of despair, so this sudden turn of events was unbearable, even for a recluse like him.

Xia Yi had hoped for a quick death, though in the end, he didn’t dare to test out the dissimilarities in hardness between his head and the rocks. When he was still on the cruise ship, he’d considered running into some sharp surface, but it wasn’t that easy. At the same time, since he wasn’t a doctor or a police officer, Xia Yi didn’t know what the chances were of him thoroughly knocking himself to death.

Before he’d swum to this island, he still had a little bit of hope.

For instance, hiding away in a house and being trapped on a ship had vastly different effects on one’s mentality. Though this island was much smaller than the Thalassa Goddess, if it was actually inhabited and its people told him that this wasn’t the end of the world, or even if they’d done nothing and just left him alone, it would have been a great relief. All the food and water was for oneself so there was no need to steal. People felt safe when they could stand behind closed doors.

No one would come out to face danger unless there was no other option.

Although, in all honesty, the greatest blessing during an apocalypse would be to hug one’s parents and children, kiss one’s lover goodbye, and lay down at home to await death together. Xia Yi constantly vacillated between thoughts like ‘it’s nice to be alone’ and ‘I don’t want to be alone anymore’. He didn’t know what kind of life was perfect, but due to his inability to achieve the latter option, he could only resign himself to a lonely existence.

It took three hours for Xia Yi to become both disappointed and glad. This was just an uninhabited island with no fresh water or living creatures.

Now, fate had pulled him away from death’s doorstep.

Xia Yi leaned back and it took a long time before the raindrops reached his lips and rolled into his mouth.

But the water had a strange taste.

He gagged instinctively, but the rain’s coldness quickly caused him to pause his action.

On his way here, he had definitely been exposed to a significant amount of radiation. According to the calculated average, he would die from either skin cancer or other radiation-induced diseases within half a year to, at most, three years. However, if he didn’t eat or drink anything, he’d be dead before the day after tomorrow.

So, did the question just change from whether he should even live, to how long he could live?

Xia Yi laid against the wet rocks, chuckling under his breath as he stretched out his sore limbs.

Like always, he could only laugh comfortably when he was alone. He wouldn’t feel burdened, nor would he have any difficulty in doing so.

In an apocalypse, people were supposed to live everyday as if it were their last. If they couldn’t, they might as well just find a quick and clean way to die. Xia Yi remembered the mental struggles he’d had before and shook his head. His brain was clearly confused and illogical. Fate wouldn’t toss him a rope named hope on a barren island like this.

Xia Yi was extremely tired so he stayed put and drifted back to sleep.

The drizzle didn’t last for long and halted before daybreak. The wind began to blow and the monotonous waves tossed at a regular rhythm.

Xia Yi was woken up by the sunlight.

The water in his clothing and hair had long since dried, and when he felt his forehead, it didn’t feel too hot. In case it was his hand that was actually warm, he crawled a few steps on purpose, and yet he didn’t feel any dizziness. On the contrary, because he’d slept so well in the later half of the night, he felt incredibly energised.

This made no sense.

Even if the rain contained no radiation, he didn’t possess that strong of a physique which allowed him to sleep outside and under the rain with no fever or aches.

The only discomfort Xia Yi felt was an excruciating hunger. It had been roughly a day and two nights since he last ate, barring the several shellfish he’d barely managed to crack open.

Xia Yi rarely ate seafood, and the few times he did, they were always fully cooked and ready to be eaten. He had no experience with opening a completely fresh shellfish nor was he aware which parts were even edible. In the end, he’d tried his luck, discarded the black-and-yellowish substance near the edge and swallowed the pitiful remains of the sea creature. It had tasted so disgusting that he’d almost thrown up.

But now he had to face a serious problem.

Xia Yi was stuck on a barren island. Plants? Sure, they existed, except they were shriveled up and dead.

After considering the impracticality of digging up tree roots, Xia Yi had no choice but to head back to sea.

Near the island, there existed a type of prune-coloured algae in the cracks of the reefs. If Xia Yi’s memory served him right, then that algae was purple laver. Like many people with autism, Xia Yi had a stronger sense of memorising images than the average person. His world didn’t always follow the logic of language, and he’d even remember a word by turning it into a clear picture in his head.

He was reminded of some kind of purple laver salad he’d eaten in a hotel somewhere.

Xia Yi hoped it wouldn’t taste too bitter or sour when he ate it fresh off the rocks.

Xia Yi ran to the shore as quickly as possible and disappeared beneath the water. Though today’s sun wasn’t as scorching as yesterday’s, it was still better to avoid unneeded exposure to it. Xia Yi couldn’t help but massage his twitching stomach after recalling the journey he’d taken and what he’d seen underwater yesterday. Even if he didn’t collapse halfway, Xia Yi still had to swim for at least an hour before reaching the area where the algae grew.

He tossed the things that weren’t already lost to the waves, like his watch and phone, into the cave.

The only reason he was still clothed while he swam was because he was paranoid about the radiation. As for how he was able to swim so far yesterday, Xia Yi still had no idea. Could it be like that saying he’d once heard: Everyone has a for something. It’s not that you’re mediocre, it’s just that the possibility of discovering it before your death is slim. There are many more musical prodigies in the West, but on the other hand, how many Chinese children have the opportunity to study piano when they’re young? All they have are the countless tutoring sessions. There are people who are gifted singers with a wide vocal range, but throughout their entire lives, they’re stuck selling vegetables by the street with nobody to admire them…

Don’t tell him that his talent was swimming?

This speculation sounded ridiculous to Xia Yi. He’d always had trouble with depth perception due to his Asperger’s Syndrome. He was hopeless at anything that required hand-eye coordination; he couldn’t drive due to his inability to accurately park a car in a small parking lot, nor could he shoot a three-pointer in basketball. Although this effect wasn’t to the extent of pushing a trolley into the person in front of him at the supermarket— but him? Good at swimming?

Suddenly, Xia Yi noticed that because his mind was preoccupied, he hadn’t floated to the surface for a breath of air in a while. However, he didn’t sense any suffocation at all; the only thing he could feel was his painfully grumbling stomach that was causing him to break into a cold sweat.

Xia Yi broke out of the water and took a deep breath, and the strange sensation reappeared.

But he didn’t have time to ponder over the situation because he could see a field of prune-coloured algae growing at the bottom of the sea in front of him, swaying gently with the rise and fall of the waves. How could a starving person think of anything else?

Xia Yi didn’t know if he was just particularly unlucky or if there were other reasons, but he didn’t see a single shellfish on his way here.

This region of the ocean was unusually still, as if it was already dead.

Unlike the plants on land, algae’s roots only attached themselves to rocks to prevent being washed away by the current. Thus, Xia Yi didn’t have too much difficulty in uprooting them— at the very least, it was much simpler than cracking open shellfish. Throwing away the thicker main branch, Xia Yi broke off the fine tips and hastily chewed one. It tasted okay and wasn’t bad enough to make him nauseous, it was just a bit salty.

Xia Yi tore off a handful and was about to float back up when a brilliant reflection from silver scales flashed in front of him.

Was that a fish?

He was a starving human with nothing but algae to eat, so please understand his surprise and joy upon seeing a fishtail.

Xia Yi quickly turned around, but all he saw were beautiful silver scales twisting deftly in the water. Judging from the light silver, translucent tail, this was a very big fish.

Xia Yi then realised something: when a fish was this huge, who was gonna end up eating who?

He immediately began to swim forward and tried to change his direction, yet no matter where he turned, the churning waters caused him to only barely see a fishtail. Xia Yi couldn’t even convince himself that the fish had swam away.

Imagine a human-sized fish swimming behind you while creepily staring at you— what could it possibly want?

Xia Yi’s blood ran cold and he immediately swam up towards the surface of the sea as quickly as he could. If he wasn’t mistaken when he rose for air earlier, there would be a shoal rock about a few square metres big nearby. 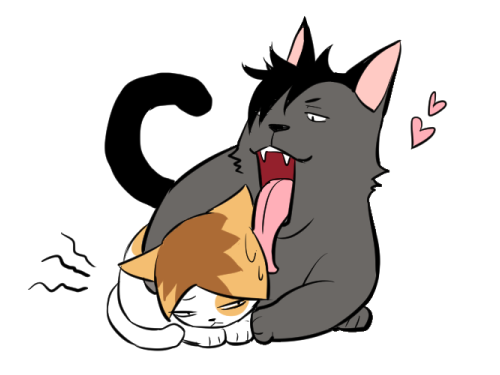